The Death And Donuts Thriller Series

Each domestic thriller follows the case of a different serial killer. The thread linking them together is the Crew. They are a group of murder enthusiasts, retired agents, and one or two reformed or want-to-be reformed serial killers.

Death is discussed in the fictional Mayday Donut shop in the capital city of Texas. The Crew asks no questions of each others past. Instead they work together to help desperate victims stop murderers from destroying or ending their futures.

Don’t Kill For Me, A Death And Donuts Thriller, Book One. 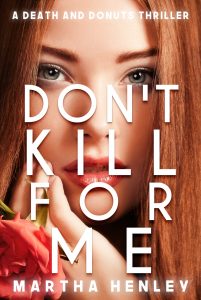 If a serial killer is murdering your enemies, do you stop him?

Eileen Somers is flattered by a series of anonymous letters delivered to her floral boutique. The author rambles on about the past, mentioning places and things that feel familiar to her. She’s intrigued and wants to meet the secret admirer. Then he confesses to murder.

The vigilante Rest in Peace Killer has chosen Eileen as his latest victim. The loss of his first target, her married lover, makes Eileen’s life complicated. She struggles, hiding her grief, unsure if he really was murdered for her benefit. In the next confession, signed RIP, the killer makes it clear he will continue to eliminate her adversaries to give her peace of mind. Eileen sheds no tears over his second victim, but RIP’s attention is undesired.

Help is sought out and found in an unlikely location, a donut shop with an unusual weekly gathering. The crew, a group of murder enthusiasts which may or may not include a couple retired serial killers is clued into Eileen’s situation. None of them expected Rest in Peace to resurface. The crew knows more about the peace seeking killer than they let on. RIP’s clues, left in the secret admirer notes are there to decipher, if someone from the crew would read them.

Identifying a serial killer who walks among the ordinary shoppers in the mall seems impossible, but Eileen is desperate to stop his mission. Innocent or not, when he’s finished killing for her, Eileen will be his last victim.

Buy the debut domestic thriller from Martha Henley, Don’t Kill For Me today. This plot-twisting novel will have you looking twice at every stranger who crosses your path.

Don’t Speak For Me, A Death And Donuts Thriller, Book Two. 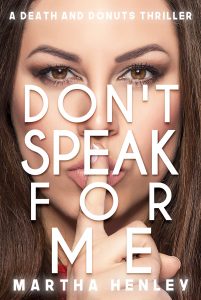 Unspoken words can save or take a life.

Reina Dawkins has had three stressful life events in one day. Her unmarried daughter announces she’s pregnant, she catches her husband in bed with another woman, and one of her terminally ill clients has just passed away. Fate pushes her to a remote RV park to make a decision. Live life or let it overwhelm her.

Deep in the Texas hill country, there’s a house that holds a dark family secret. Brothers, Nick and Fred Walters live there together and manage the nearby Rose Rock RV Park. The residents talk of the ghost of Eden’s Garden, a place the Walters boys seldom acknowledge exists. Hidden in the woods, not far from the trailers are graves left by the previous generation of Walters. Born to serial killer parents, murder runs in both brother’s blood. One has shut his mouth to show his family loyalty. The other is killing to keep his family together.

When Reina arrives, her background in caring for special needs clients, concerns her neighbor. Nan is a regular member of the Crew. This group of murder enthusiasts, agree that a woman with Reina’s sills is in danger and shouldn’t be living so close to the Walters house. Only the Crew has gathered sufficient evidence to inform and hopefully protect Reina from the serial killer that’s continuing to toil in the soil of their parent’s.

Even though she’s been warned, caregiver, Reina will accept the dinner invitation from a killer. Her survival will open wounds and challenge family bonds. One Walters sibling will pay the ultimate price for murder and the other will loose everything.

Don’t Speak For Me is the second standalone book in The Death And Donuts Domestic Thriller series. Read all of the secrets buried in a tiny trailer park in Texas, buy Martha Henley’s suspenseful novel today.

Die Twice For Me, A Death And Donuts Thriller, Book Three. 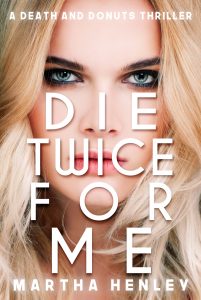 Her closest friend is convinced she’s a serial killer.

Cate Jacoby is a single woman dating to improve her status. She’s had a string of bad luck with men. Five of her previous lovers died, while dating Cate. Her best friend has taken to calling her the Black Widow Killer.

Murder enthusiast, Nan Fellows of the Crew gets involved. She’s enamored with the gorgeous blonde. Will she get caught in the Black Widow’s web? Is Cate even a killer at all?

Read the book told entirely from a Black Widow Killer’s point of view. Find out if she’s worth dying twice for and who will survive courting the Black Widow.

Follow me on Facebook to be the first to see the cover reveal of the rest of the books in the series. Join my mailing list to get a free preview before each of the novels launch.